As the name suggests, Andy Warhol’s Campbell's Soup is not a soup variety, but an art piece. It is a collection of 32 different 20x16 inches canvases, each of which is a painting of a can of Campbells soup in different colors. At first sight, you will not feel anything special about them, and all of them look very much the same. But when you take a close look at their names, each represents a different soup variety available at that time. They were created in 1962 by Andy Warhol, who was a successful painter, author, film director and painter. He showed this creation in the Ferus Gallery, Los Angeles, California, and marked the beginning of Pop Art in the West Coast. Read this oneHOWTO article to find out why is Andy Warhol's Campbell's Soup famous?

You may also be interested in: How Did Andy Warhol Become Famous?
Contents

While Warhol was working on his new ad and comic strips in 1962, he came across the comic strip painting of Roy Lichtenstein at the Leo Castelli Gallery. At the same time, one of his friends suggested to paint something that is easily recognizable by everyone, just like the Campbell’s Soup. Feeling inspired, Warhol bought some soup can varieties from a nearby store, and started tracing their images on the canvas. He made sure to closely resemble the original look of the offset lithograph can labels. This was the first time Andy was concentrating more on giving a mechanical type of reproduction to his art work. When Irving Blum from the Ferus Gallery visited his studio, he was astonished with the soup can paintings, and offered him a show in the gallery that very summer. Feeling encouraged, Andy painted each of the 32 Campbell soup can varieties on canvas, and exhibited them on the gallery shelves.

How were the paintings received by the audience?

The mild sensation that this gallery brought in Los Angeles is what makes Andy Warhol's Campbell Soup famous and one of the reasons the artist became famous. Their novelty intrigued the daring people associated with films and youthful art. Many people criticized the paintings for their monotony, lack of art and commercial subject, but most welcomed it as a new art form. From the first presentation of the paintings at the Ferus Gallery, Blum sold five of them, but bought them back from the purchasers after realizing that the collection of 32 paintings work best when treated as a single art work. Later, he purchased the entire set for the good amount of $3000 at that time.

Why did Andy choose Campbells soup cans for his paintings?

According to one notion, Andy Warhol was a regular consumer of Campbell’s soups, and the empty cans lying on his work desk inspired him to paint them on canvas. Campbell was already a major soup company in the US at that time, which is why it represented the fast consumerism culture that was at a high point in the country in those times. In fact, four out of every five soup cans sold were from the Campbell Soup Company only. Despite this, Andy Warhol chose not to enter in any kind of business relationship with the company. If he did that, the entire purpose of the paintings will be lost and it will merely become a commercial tie-in.

With Andy Warhol's Campbell's soup cans, Warhol drastically changed the entire concept of art at that time. Rather than choosing any of the other art topics, he used mechanical objects of commercial subject while emphasizing their packaging. As he used multiple variations of the soup cans, he built some respect for the technique of repetition. With this kind of art, the presentation becomes more important that the object that is being presented. Andy Warhol’s Campbell's soup was something widely consumed and used in the US during that time, due to which the paintings were so heartedly welcomed by the masses. All in all, Andy Warhol’s Campbell soup paintings were not repetitions of artwork, but an artwork theme that everyone loved.

If you want to read similar articles to Why Is Andy Warhol's Campbell's Soup Famous?, we recommend you visit our Learning category. 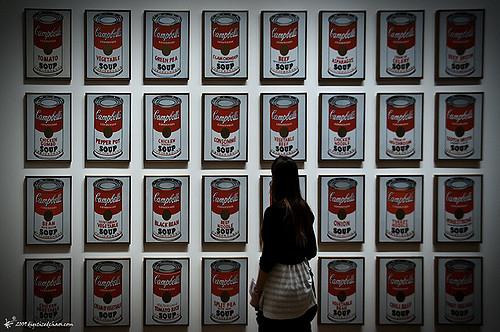 Image: flickr.com
1 of 2
Why Is Andy Warhol's Campbell's Soup Famous?
Back to top